Home  AJWS Blog  Summer Stories of Hope and Resilience: Inspiration from Around the World

Summer Stories of Hope and Resilience: Inspiration from Around the World

As you know, this has been a summer of painful extremes. Brutal heat waves, fires and floods have swept the globe — clear effects of climate change. Surges of new variants of COVID-19 are making our hoped-for return to ‘normalcy’ more tentative than it seemed just months ago. And waves of political violence have torn through multiple countries, destabilizing democracies and throwing communities we support into chaos.

But during this difficult summer, the grassroots organizations AJWS supports simply refuse to cease their fights for human rights, dignity and justice. For every new crisis we’ve witnessed in the countries where AJWS works, there are activists bravely rising to take on the challenge. In their bravery and resilience, we find hope.

With the inspiration of our grantees, we are proud to present you with this edition of Stories of Hope & Resilience, a special selection of stories from the courageous advocates we support around the world. Their tireless work is made possible by your generosity — without you and the whole AJWS community, we couldn’t support over 500 grantee organizations in 18 countries to stand, every day, on the front-lines of battles for human rights.

As we ready ourselves for the Jewish High Holiday season — a season of renewal and change — let’s not forget that even amidst ever-mounting extremes, some things remain dependably constant: the powerful work of the activists we support, and your commitment to stand with them.

Haitian activist and AJWS partner, Pierre Espérance, recently said it best: “Politicians come and go, [but] we are the ones who continue to risk our lives every day to work for a better future for our country.”

In extreme, unpredictable times, we hope that the strength of these activists — and their hope and resilience — inspires you as you read these stories.

— Your Friends at AJWS

Earlier this year in the Dominican Republic, the government rolled out a vaccination campaign that cruelly left out vast swaths of the country’s population, including migrant workers and black Dominicans of Haitian descent. But AJWS grantee organization Caribbean Migrants Observatory (OBMICA) fought back against this blatant discrimination. Read about their ambitious vaccine equity campaign, how they changed the hearts and minds of government officials — and how they’re making sure that everyone has access to a life-saving shot.

“We Cannot Stop Working, It’s That Simple” — Supporting India’s Most Vulnerable People Through the COVID Surge

This spring, India was engulfed in a COVID-19 surge unlike any the world had ever seen. AJWS sprang into action, launching an emergency campaign that provided critical, life-saving support to thousands of people via our grantee organizations throughout the country. Learn how Kashtakari Panchayat in Western India helped women essential workers protect themselves — and hear from two of the women whose lives were touched by the support of the AJWS community. 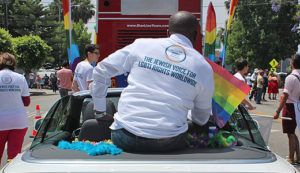 What Pride Means to Me: A Ugandan LGBTQI+ Activist Speaks Out

In his powerful, touching essay, Ugandan LGBTQI+ activist Julius Kagawa looks back on the moment when he finally cast aside shame and fear and boldly began living his truth — a process that has shaped his work leading SIPD — an AJWS grantee that fights for the rights of the Intersex community. Today, he’s a leading voice in Uganda’s movement for a more open, accepting society — and his story of finding that voice will inspire you.

“How the U.S. can choose to be on the right side of history on Haiti”

“An Appeal To President Biden: Change Course on Haiti Now”

In these two must-read pieces, leading Haitian activists Rosy Auguste Ducena and Pierre Esperance (both AJWS grantees) offer sobering and illuminating accounts of Haiti’s current cycle of violence and chaos following the assassination of former President Jovenele Moïse, and explain how the U.S. must act now to help rebuild a just, democratic Haiti.

“They’ve been beaten, trolled, threatened with sexual violence but refused to be silenced”

This interview with Andrea Ixchiu Hernandez of AJWS grantee Festivales Solidarios is part of CNN’s ongoing series on gender inequality. Here, Andrea, an Indigenous Guatemalan activist and journalist, describes how she survived a harrowing attack from illegal loggers deep in the forest — and explains the dangers human rights defenders face in Guatemala.

Meet some of the young women whose lives have been changed by Alwar Mewat Institute of Education and Development (AMIED), an AJWS grantee in Rajasthan, India — a region where women and girls face pervasive gender inequality and high rates of early and child marriage. The piece is a sobering but hopeful read about how COVID-19 has made life more challenging for these young women — and how AMIED is supporting them to take agency over their own lives and fight for their right to decide if, when and whom to marry.

“How U.S. Policy Impacts LGBTQI+ People Around the World”

Hear AJWS’s Sexual Health and Rights Policy Advisor, Andrea Gillespie, sit down with the hosts of the rePROS Fight Back podcast for a conversation about how U.S. foreign policy can have real-life effects on the communities that AJWS supports around the world. Andrea describes many of the policies that AJWS advocates for in Washington, D.C., and explains how the Biden administration is beginning to repair the damage wrought by his predecessor.

The people of Haiti need you right now. On August 14, a 7.2 magnitude earthquake struck just off the shore of Saint-Louis-du-Sud, destroying whole neighborhoods and trapping people underneath. The destruction is nothing short of catastrophic.

And this earthquake is just the latest major crisis to hit Haiti this year. COVID-19 is spreading in the country with no health infrastructure to cushion the impact. The assassination of former president Jovenel Moïse last month pushed Haiti’s undemocratic government into complete instability. Violent gangs that were empowered by Moïse and his party continue to terrorize Haitians with impunity and rule the streets.

Right now, our partners in Haiti are addressing the urgent humanitarian needs of families at the earthquake’s epicenter, while continuing to resuscitate Haiti’s democracy and stabilize the country. Your support right now will help them advance all of this critical, life-saving work. Will you stand with the people of Haiti today?