The United States Must Act Now to Save the Rohingya

By Tun Khin and Robert Bank

As we mark the one-year anniversary of the ongoing Rohingya crisis, we are eagerly anticipating a report from the U.S. State Department which will officially document the horrendous crimes committed by the Burmese Military against its own Rohingya community. The report will detail and shed light upon the Burmese military’s violent operations launched on August 25, 2017, which left thousands of Burma’s ethnic and largely Muslim Rohingya minority dead, and drove more than 700,000 Rohingya people from their homes in Burma’s Rakhine State into neighboring Bangladesh.

The report comes in the wake of a year’s worth of credible, well-documented evidence from the global human rights community. Together, Amnesty International, Human Rights Watch and Fortify Rights outline the Burmese military’s systematic preparations for crimes against humanity, the ensuing violence and repression, and the current dire state of refugees in Bangladesh and remaining Rohingya in Burma.

As a Rohingya human rights leader and as the leader of an American Jewish human rights group – which leads a consortium of Jewish groups that believe “Never Again” applies to all people everywhere, including the Rohingya – we look forward to the new report. But it is just the beginning.

Action must follow. Armed with the State Department report and another expected soon from a UN fact-finding mission, the U.S. government will have more than enough information to take the actions that we had hoped it would take over the past 12 months since this tragedy began.

Unfortunately, legislation introduced in the U.S. Senate last year, which originally aimed to place sanctions, provide humanitarian aid and seek justice, has stalled – largely due to the intransigence of Senate Majority Leader, Mitch McConnell. While some important policy steps have been taken by Congress since the crisis began – the U.S. has provided significant humanitarian aid and sought out this report by the State Department – more needs to be done.

And more can be done without relying on the Senate or the House: the Executive Branch has a range of powers that it has not yet put into action but can do so immediately. Specifically, the U.S. administration has three powerful policy levers at its disposal.

First, it can and should use its existing powers to sanction the main architects of violence against the Rohingya. We were gratified by the announcement last week that four Burmese military officials and two infantry divisions were sanctioned under the Global Magnitsky Human Rights Accountability Act, which allows the U.S. government to identify and rebuke individual human rights violators around the world. This allows the U.S. government to freeze bank accounts and block the visas of Burmese military leaders believed responsible for orchestrating the violence, but we call on the U.S. to add more high-level names to this list such as, Min Aung Hlaing, Soe Win and Mya Tun Oo, all of whom have been cited by human rights organizations as key architects of the violence. The State Department report should give the administration the information it needs to use this tool more effectively to hold alleged Burmese military perpetrators to account.

Secondly, the U.S. can seek justice. In keeping with the wishes of many Rohingya people, the U.S. government can use this State Department report to take a leadership role in calling on its fellow U.N. Security Council members to refer the Burma situation to the International Criminal Court.

Finally, the U.S. government can use its diplomatic relationships to urge the Burmese government to reinstate full citizenship to the Rohingya minority and create the conditions to ensure a safe and dignified return back to Burma, guaranteed by international protection for the hundreds of thousands living in vulnerable conditions in refugee camps across the border in Bangladesh.

As human rights leaders, one a Rohingya and the other an American Jew, we retain hope that the U.S. Government can still be a positive force in foreign policy for the benefit of the Rohingya people: the proof will be in the content of the State Department report and the actions of the executive branch that are so urgently needed. 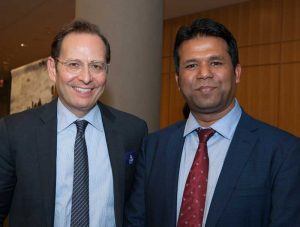 Tun Khin is the President of the Burmese Rohingya Organisation UK (BROUK).

Robert Bank is the President and CEO of American Jewish World Service.