Looking Back, Moving Forward: Uganda’s Anti-Homosexuality Law and the Fight for Human Rights

It was a moment we could barely believe had come. For more than four years, my Ugandan colleagues and I watched and waited and debated and strategized as the Anti-Homosexuality Bill emerged and disappeared from Uganda’s political agenda. Yesterday, Ugandan President Museveni signed the bill into law.

First introduced in October 2009, the Anti-Homosexuality Bill was decried by Ugandan human rights activists and international watchdogs as a red herring—a distraction from Uganda’s very real challenges of widespread poverty and rampant corruption. We held out hope over the years as Museveni deflected calls for the bill’s passage; he urged advocates of the legislation to exercise caution and consider the foreign policy implications surrounding it. We theorized about the political aspirations of the bill’s various proponents. Now it seems that the person who had the most to gain politically from the bill’s passage was the president himself.

Shortly after receiving his party’s blessing to run for an incredible fifth term in office, President Museveni—having successfully sidelined any internal opposition and seeking to solidify popular support—agreed to sign the bill. He has now positioned himself as a defender of African values, a bulwark against the influence of meddling Western groups who “are fond of coming into our schools and recruiting young children into homosexuality and lesbianism, just as they carelessly handle other issues concerning Africa.” Any criticism coming from the U.S. or other Western nations now just serves to bolster Museveni’s popularity at home.

Worst of all, Museveni signed the bill as it was passed by the Ugandan parliament in December. True, it no longer contains the death penalty. But it makes consensual same-sex relations—or even the intent to commit a sexual act with someone of the same sex—illegal and punishable with life imprisonment. It mandates HIV testing of people accused of “aggravated homosexuality,” which includes so-called “serial offenders.” It makes renting a home or office to an LGBT person illegal and punishable with seven years in prison. It criminalizes the “promotion” of homosexuality, including those who provide aid “or in any way abet homosexuality and related practices.” This will have huge implications for those who, like AJWS, provide funding to LGBT groups, as well as health care providers, legal aid services—essentially  anyone who offers support to the LGBT community.

The Anti-Homosexuality Bill is an affront to human rights and has rightly spurred international outcry. But there’s more to it. The bill’s signing occurred not within a vacuum but within the context of an increasingly repressive state. Over the past several years, teargas and rubber bullets have become regular features of protests; opposition leaders have been detained and harassed; media houses critical of the government have been raided and shut down; and NGOs working on sensitive issues like corruption, oil and land have been threatened and intimidated. In this context, the Anti-Homosexuality Act is not just an assault on the dignity and lives of LGBT Ugandans, it’s another avenue for the suppression of civil society.

So what happens now?

While the bill has been signed, it’s not yet enforceable. It must first be published in the official parliamentary gazette—something that could take days or weeks. In the meantime, a coalition of human rights organizations is mobilizing a legal challenge of the bill in Uganda’s constitutional court. The human rights of LGBT people have prevailed in Ugandan courts before and our partners are holding out hope for justice again.

Of course, those who have been calling for the bill all these years have little interest in procedural issues. The most frightening and unpredictable threats come from members of the public and the religious and political leaders who incite them. But the past few years have been a time of learning for both AJWS and our partners. This time, organizations are better prepared to respond to threats and to help keep their members safe. It’s certainly not business as usual. But I have no doubt that their resilience and resourcefulness will win out. AJWS will continue to support our partners in Uganda and accompany them on this long walk to freedom. 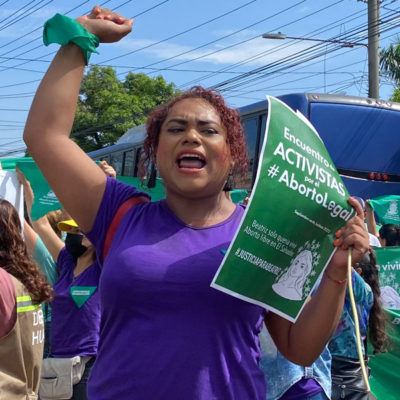