“One in three women worldwide is abused, beaten or raped during their lifetime, and we cannot stand idly by as mere witnesses to this widespread violence,” said Ruth Messinger, president of AJWS. “While the Obama Administration has made great strides in protecting women and girls worldwide from violence, we need this crucial piece of legislation to continue this progress and push our government to do even more to stop violence against women and girls.

“I applaud Representatives Schakowsky, Lowey, Wasserman Schultz, Engel, Gibson and Hanna for introducing this important legislation that will require the United States to stand up against violence against women and girls worldwide. We look forward to working with her to pass this crucial bill and ensure that the U.S. government does all it can so that every girl and woman can live free of violence and fear.”

About AJWS and its Grantees Focused on Women and Girls
AJWS supports social justice organizations in 19 countries in Africa, Asia, Latin America and the Caribbean that promote equality and work to end discrimination and violence against women and girls so that they can access the full spectrum of opportunities in society and live in health, safety and dignity. AJWS is the 11th largest funder worldwide of women and girls’ rights. It is the largest in the Caribbean, fourth largest in Sub-Saharan Africa and fifth largest in Asia.

Here are three examples of the work of AJWS’s grantees:

In Kenya, Fortress of Hope helps girls develop leadership skills and implement their own strategies to stop violence. It works to help them stay in school, avoid domestic abuse and prevent unwanted pregnancy or infection with HIV.

In India, Awaaz-e-Niswaan provides a haven where girls can meet peers and learn to understand and defend their rights. It also provides girls with college scholarships, vocational training and assistance in finding jobs to help them gain financial independence. This enables them to have greater choice in whether or not to marry and to leave abusive situations.

In Haiti, Gwoup Apui pou Devlopman Depatman Sid works to end violence against women and girls by raising awareness, educating activists about human rights and building their capacity, and supporting survivors of violence. 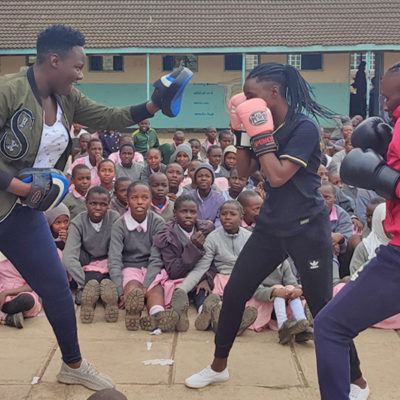