Stories of Hope: Women Leading the Way into the New Year

This week marks what would have been the 50th anniversary of Roe v. Wade – the U.S. Supreme Court’s 1973 landmark ruling that established the legal right to abortion. A right that was mournfully struck down last June, marking the first time the Court has taken away a constitutionally protected liberty. Yet, in the months since the decision, there have been a number of hard-fought victories and important milestones in the fight for reproductive rights here in the U.S. and by social movements led by brave women around the world.

That’s why this edition of Stories of Hope is dedicated some of the most inspiring, passionate changemakers in the AJWS universe: women leading ground-breaking movements to shape the future and build a better world.

Through the stories below, you’ll meet a collection of trailblazing women across several of countries where funding from AJWS is making a difference. Women who are boldly breaking into politics in Senegal. Brave activists who are tirelessly fighting against brutal anti-abortion laws in El Salvador. An innovative LGBTQI+ leader who is leading the fight for marriage equality in Cambodia.

Around the world, AJWS supports grassroots feminist and women-led organizations like these to empower local women and other marginalized people to stand up for their rights, take control of their futures and break down the barriers that dictate what they can achieve.

As we kick off 2023, let these stories of hope inspire you to keep fighting against injustice wherever you see it, with the AJWS community and beyond.

— From your friends at AJWS 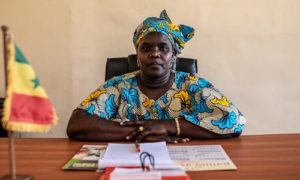 Claiming a seat at the table: The feminization of politics in Senegal

For generations in Senegal, politics have been overwhelmingly dominated by men. But today, a new generation of women are demanding that their voice be heard — at the ballot box and in the halls of power. AJWS grantee Association des Juristes Sénégalaises (AJS) is giving them the tools to make that change. AJS recently held leadership and political education trainings for over 150 women hungry to shape the future of their country. It worked — today, many are community leaders and elected officials. Meet some of these inspiring women as they invite one another to “come and take your power.” 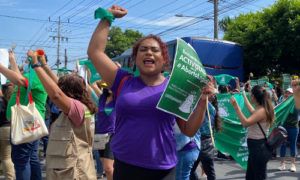 The “Green Wave”: Feminists fight for abortion rights in El Salvador and beyond

El Salvador has one of the strictest abortion bans in the world: Seeking an abortion or having a miscarriage can result in a murder charge and up to 40 years in jail — and activists protesting these laws face a threat of detainment. But across the country, more and more women are defiantly waving green flags — the Latin American symbol for abortion rights —refusing to live in fear. Read the story of brave Salvadoran activists who, against all odds, are taking to the streets to fight for the most basic of human rights: control over one’s own body. 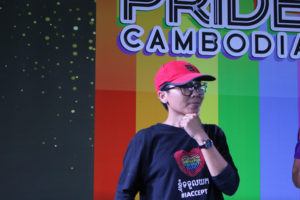 After bravely coming out as lesbian to her mother, Ly Pisey decided she wanted to create a community for LGBTQI+ people in Cambodia. She founded Rainbow Community Kampuchea (RoCK), an AJWS grantee that is now at the forefront of the fight for LGBTQI+ rights. Today, Pisey is leading the charge for marriage equality, boldly traveling the country to rally public support. Watch this installment of AJWS’s new video series, Activists Up Close, and hear directly from Pisey about what gives her hope.

Read this compelling, personal op-ed by AJWS advocate and 2019 AJWS Global Justice Fellow Rabbi Eve Posen, who draws upon Jewish texts to argue for Congress to support the Abortion is Health Care Everywhere Act. This measure would permanently repeal the Helms amendment, a harmful policy that bars U.S. foreign assistance from funding abortion services around the world.

"Quality education in India: A dream worth fighting for"

Read the second installment of an exciting new series written by ambitious young women trained to be grassroots journalists by AJWS grantee MJAS. Here, writer Neeraj Gurjar profiles other young Indian women fighting for their right to an education. They’ll continue their struggle, says one of these brave women, “until the time that every single girl achieves the status of education that she wants.”

"On the frontlines of drought, communities in Mexico strive to save every drop of water"

In drought-prone Oaxaca, Mexico, AJWS grantee Flor y Canto was the driving force in winning a battle with the Mexican government to return control of local water sources to Indigenous communities. But, as Mongabay writes, they’ve also worked to preserve that precious resource, helping to create nearly 600 projects to capture water and irrigate plants. Read about this win for both the people and our planet.

In September, 2022, the Indian Supreme Court ruled that “all women are entitled to a safe and legal abortion.” But implementing that groundbreaking ruling across the country may be complicated. In this deep-diving article, AJWS partner Centre for Enquiry into Health and Allied Themes (CEHAT) explores how the Indian medical system must be changed to ensure true reproductive rights for all.

"Who owns a woman’s labour? In Bombay High Court order, a troubling answer"

In this passionately written op-ed, Manjima Bhattacharjya of AJWS’s India team addresses a disturbing recent ruling from the Bombay High Court. The judgement dismissed a domestic violence complaint from a woman, insinuating that housework is inherently a woman’s role within a marriage. Manjima cites the research of several AJWS grantees in India to create her insightful piece.

The crackdown on access to abortion services last year deeply eroded reproductive rights in our country, giving us a new understanding of what life is like for millions of people around the world who live where abortion remains illegal, heavily restricted or unsafe. At AJWS, we are proud to partner with brave activists who are leading the fight for reproductive freedom in communities around the globe. Sign on to pledge your support and solidarity with activists working on the front lines of movements for reproductive rights and freedom.