Three years after AJWS made a film about Khushi’s life, she’s gone from driving cabs to training a new generation of girls just beginning their careers.

When I first met Khushi Prajapati, her story was already unusual.

As a teenager, she’d worked as a maid to try to help her family make ends meet. It was one of relatively few professions available to women without access to higher education in India, and it didn’t pay enough. Khushi felt like her employers didn’t respect her. At the same time, she was facing immense social pressure to do what women her age were expected to do: Get married. Have babies. Settle into a lifetime of more domestic labor, minus the pay.

Khushi wanted something different from her life, and she found it at Azad Foundation’s “Women on Wheels” program. With support from AJWS and other funders, Azad trains low-income women in India to become taxi drivers. The program helps young women like Khushi break into a profitable, traditionally all-male profession—and the newfound income and confidence often leads to more decision-making power at home.

Khushi’s new career meant that, at age 23, she didn’t feel that she had to get married. That’s not always the case in India, where the median age of first marriage for women is 19 and the proportion of women in the workforce has been dropping. It went from 37 percent in 2005 to just 27 percent in 2014.

“The biggest benefit of not getting married is that I have a lot of freedom,” Khushi said. “What I do now is a profession … I am doing work that most girls do not.” 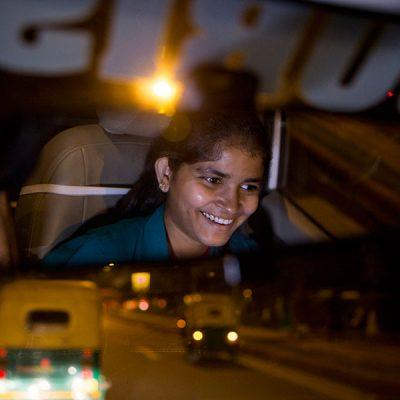 Three years ago, we sat on the floor of her tiny apartment—which she shared with her parents, brother and three sisters—and she told me about her hopes for her future. One of her biggest goals: to buy a house for her family.

This struck me as a long shot. I knew exactly one unmarried woman in the U.S. who had purchased a house. In my 30s and struggling with the New York City dating scene, I’d started to reckon with the possibility that I might not find someone I wanted to marry—and the financial implications seemed dire. But Khushi seemed so sure of her abilities. She made me question whether I’d set my sights too low for my own future.

I wasn’t the only one inspired by Khushi. After AJWS produced a film about her in 2015, The New York Times’ affiliate Women in the World reported on her success story. The documentary short on Khushi later won the Audience Choice Award from the 2016 Women’s Voices Now Film Festival.

Bathrooms and Other Barriers

As with any story, a lot got left on the cutting room floor. We skimmed over some of the challenges, especially the ones that continued after the happy ending. For example, Khushi said one of the most difficult parts of her job was finding a place to use the bathroom. The male drivers just pulled over and peed in an alley or behind a tree. Waiting outside fancy hotels to pick up clients, Khushi had to convince the staff to let her inside to use the loo—awkward, and sometimes she just had to hold it. For hours.

You can probably imagine why this detail didn’t make it into the film. But I never forgot it, especially after I heard about some of our women’s rights grantees taking up “Right to Pee” campaigns. When I spoke to a few coworkers in India about this problem, they said it’s about more than just bathrooms; it’s about making women feel welcome in public spaces in India, even though a lot of men would prefer they stay at home.

When researchers for an Azad study asked low-income women in Delhi what they most wanted at work, the women expressed concern about basic health and safety issues: having drinking water and sanitation facilities, not having to worry about sexual harassment or assault. And the resources they needed to secure better jobs—mobile phones or internet cafes, for example—were often considered taboo for women to use. Many women said their parents or husbands dictated what kinds of jobs they could take and how to spend their earnings.

A lot of people talk about the gender pay gap here in the U.S., but the global statistics really put the depth of inequality into perspective. Women comprise two-thirds of the world’s labor force, but still own just 1 percent of the world’s wealth. Sometimes, looking at all the research, the situation strikes me as hopeless.

Then I remember women like Khushi. Her story didn’t end in 2015. Recently, I learned that she bought her family a house. She also went from driving cabs to working as one of the trainers at Azad, where they occasionally show the film about Khushi to new recruits. “They get quite motivated seeing my story,” Khushi said. “They say, ‘Her story is famous even in America!’”

In the future, she’s planning to support her younger sister as she studies to become a doctor. And, now that her family has a home, Khushi wants to buy another one day. A place she’ll own all by herself.

Her story is still unusual. I didn’t make videos about all the girls in Delhi who continue to work backbreaking jobs for little or no pay. And while the young women who finish the driving program will almost certainly increase their earnings and confidence, they might not reach Khushi’s level of rapid career growth.

In many places and for many reasons—both within and well beyond their control—women will sometimes fall short of their financial and professional aspirations. (To no one’s surprise, I did not manage to buy a brownstone in one of the world’s most expensive cities in the last three years. This is not a tragedy, though it can feel like one when my neighbor across the hall blasts Seal’s “Kiss from a Rose” and sings along.)

But I keep thinking of what Virginia Woolf advised young women back in 1929, when she wrote “A Room of One’s Own” and reflected on the generations of women whose insights and talents languished because they weren’t allowed to study or work. Woolf lamented that no woman yet had the power to realize her ambitions fully or speak her mind freely. She predicted that a woman like this could be born in the coming century—but cautioned that creating the circumstances necessary for her to thrive would require hard, sometimes lonely work from many, many women.

“As for her coming without that preparation, without that effort on our part … that we cannot expect,” Woolf wrote. “But I maintain that she would come if we worked for her, and that so to work, even in poverty and obscurity, is worthwhile.”