Home  AJWS Blog  On Paying Attention: Why you need to read this NYT story on women and oppression in India

On Paying Attention: Why you need to read this NYT story on women and oppression in India

When the story came out in the New York Times this weekend, there was a flurry of excitement—at least, whatever qualifies as excitement over email—as the link sprang from inbox to inbox at AJWS. On Monday, I discovered fervent nods of enthusiasm whenever I mentioned the article to people who’d read it. There was something special there, but I was having trouble pinning it down. What, exactly, did we want to say about it—aside from “amazing” and “powerful” and “it’s everything we’ve been working on”?

If you haven’t seen Ellen Barry’s article, “Indian Women Seeking Jobs Confront Taboos and Threats,” it’s an unusual piece. A fair number of journalistic dispatches from developing parts of the world adopt a certain routine: hastily sketched portrait of people in the throes of some unspeakable suffering, followed by uplifting story of how some trend/organization/technology is making a difference. People crave these narratives. They make us feel better. We’re more likely to bear witness to pain if we can reasonably expect an uplifting antidote is on the way.

I don’t want to spoil Ms. Barry’s story for you, but I’ll say this: it’s long, and nuanced, and it doesn’t have a happy ending. When I started reading it, I’d just sat down on the train, on my way to brunch. By the time I stepped back onto the platform, my stomach had tightened into a fist. I was in no mood for pancakes. I was mad.

It’s an emotion familiar to Geeta, who Ms. Barry shadowed as a months-long drama unfolded in Geeta’s life. It started when Geeta and a few other women got jobs at a local factory. Jobs meant the women in the village had some money, and their earnings helped them gain a modicum of power. Their families beat them less, respected them more.

Braving the world beyond their isolated community brought other realizations to the women, as well: they didn’t necessarily need to fear harassment and violence every time they left the village. Their families had taught them to be terrified when they traveled anywhere new. They were forbidden from ever touching men from outside their community—to the point where Geeta, after falling into a deep trench at work, recoiled when a man reached down to help her out. But with time, she changed. As Geeta told the Times, “When you start working, your heart opens up. Then you’re not scared anymore.”

The conflict of the story stems from the fears of men. In Geeta’s village, many men felt threatened by the women’s newfound success and confidence, so they tried to ban all females from taking on jobs beyond housework. This kind of patriarchal backlash is placing limits on the lives of women in rural areas across India, leading them to drop out of the workforce. From 2005 to 2012, women’s labor participation rates in the country started to decline, despite a booming economy: from 37 percent to 27 percent.

In Geeta’s case, she kept working anyway. The head of the village formally ostracized her—and the fear of becoming an outcast spread, leading nearly everyone in the community to shun Geeta and treat her and the other working women as if they did not exist. Even Geeta’s mother was not immune to this fear, and she stopped speaking to her daughter.

I’ve found it difficult to explain the importance of this community dynamic to American audiences when I write about why child marriage is still so widespread in India. People in the U.S. have so much freedom to behave as they like. As a result, they sometimes have trouble conceiving of just how important popular opinion is to those living in rural areas with limited access to the outside world. I mean, do I even care whether my fellow New Yorkers disapprove of me on the subway? In principle…maybe. Probably not. And in reality, their opinion has little to no impact on my life.

But in a small town, a negative review can spread quickly and viciously, and people tend to fall in line whether they agree or not. In that kind of setting, taking a stand against local leaders isn’t just a bold move, especially for a woman raised to think she’s inferior to all men. Can I call it brave without sounding too cliché? I’m not sure it’s the right word for what Geeta and her friends did in response to the ostracism they faced.

What did they do? They turned to people outside their community for help: politicians, attorneys, police. They knew something had to be done, even if the men in charge disagreed. Even if those men threatened to beat them, or worse.

What happened next is worth reading yourself. It will probably make you angry. It might make you sick to your stomach. But maybe that’s okay. A little discomfort just means you’re paying attention.

And it’s not like there’s nothing to be done with this information. There is news to feel good about here: AJWS is supporting organizations across India that work to address the very challenges the Geeta faced. These groups are increasing girls’ access to education and employment options—breaking open new opportunities for many girls who would otherwise face the prospect of child marriage, limited freedoms and a lifetime of poverty. These grantees support women and girls to advocate for their rights, helping them strategize, negotiate and try to overcome harmful beliefs about gender in their families and communities. Together, they’re contributing strength and numbers to a growing movement for women’s rights across the country.

But if I’m honest, I don’t read or write these kinds of stories because it makes me feel good. I do it because I’m angry. I do it to relieve the knot in my stomach. Because I keep thinking of what Geeta and her friends repeated when they went to see an attorney. They did not know how the justice system worked, or what kinds of help they could or could not expect, or what the consequences would be if they failed. But they knew this: 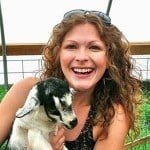 Elizabeth Daube is research communications manager at AJWS, where she currently produces videos, digital stories and publications about efforts to address child marriage and empower women and girls in India.

Learn more about AJWS’s work in India to end child marriage and achieve equality for women and girls.