In the wake of the 2010 earthquake, AJWS grantee Movimiento de Mujeres Dominico Haitiana (MUDHA) organized Haitian communities in the Dominican Republic to rapidly respond to the immediate needs of disaster victims across the border. Just 48 hours after the disaster, MUDHA mobilized Dominican-Haitian communities to assist people in some of the most remote and devastated areas of Haiti. 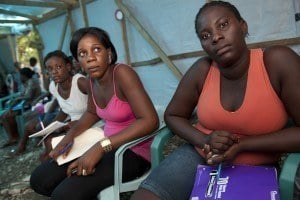 With ties to communities in both Haiti and the Dominican Republic, MUDHA was uniquely positioned to coordinate this kind of community-organized, local aid. “Our response was to get aid down there immediately, because a lot of times, these bigger organizations spend more time raising money and tend to cluster in places that are not the hardest hit,” said Ninaj Raoul, one of MUDHA’s partners in the earthquake response.

MUDHA mobilized its members to quickly provide survivors in Haiti with the medical care, food and water that they urgently needed. MUDHA also took care to address the needs of women and children—providing feminine hygiene products, undergarments and diapers—which are often overlooked by emergency aid.

Organizing Dominican-Haitian women and families to defend their rights

Before MUDHA began its earthquake relief efforts, the organization had a long history of defending the rights of Haitian people and serving those in need. Sonia Pierre, the organization’s late founder, was the child of Haitian migrants. She was born in a Dominican batey—a poor district designated for laborers, where she slept on the dirt floor with her 11 siblings.

Sonia organized her first rally against discrimination and the poor conditions in the bateyes when she was just 13.

As an adult, Sonia founded MUDHA to fight for the rights of all Dominicans of Haitian descent—with a focus on battling both gender and ethnic inequality. In 2010, Sonia won the International Women of Courage Award from the U.S. Department of State.

Creating short- and long-term solutions after the quake

In Haiti’s earthquake displacement camps, MUDHA brought many years of experience organizing communities to solve their most pressing challenges. When sexual violence became a terrifyingly common threat to women and girls living in the camps, MUDHA immediately organized camp committees to develop strategies to prevent assaults and support survivors. Staff and volunteers distributed whistles and flashlights to women and set up an alert system. This allowed tent camp communities to intervene if a woman blew the whistle, signaling that they felt intimidated or threatened.

MUDHA also opened a community center for women in the camps, where women could receive training on sexual health and ways to reduce their risk of sexual and gender-based violence. The center provides essential services for women, including a health clinic, counseling services and specialized care for survivors of gender-based violence. While many displacement camp residents have found new places to stay, the MUDHA community center is still thriving. Local women seek services at the clinic and learn valuable skills from the center’s new job training programs.