Planting the seeds for reconciliation in Senegal

In a garden in Casamance, Senegal, sprouts poke hopefully out of the soil. They are the simple beginnings of carrots, onions and radishes. But they represent so much more than food. The women who planted and nurtured them are recovering from years of fear and violence.

Casamance, the southwestern region of Senegal, has been ravaged by war for three decades. The long conflict between rebel groups and government forces killed thousands and forced more than 60,000 people to flee their homes. After a ceasefire in 2014, residents of Casamance are now returning to their abandoned land and ruined villages. Yet a deep distrust lingers between neighbors, borne of differing loyalties during the war.

To advance peace, an organization supported by AJWS called COPI has started planting “peace gardens”— plots of land where women from the community can grow vegetables together. As they sow and harvest, the women connect. And they begin to heal.

Awa Djiba is from the village of Janje in Casamance. During the war, she fled her home to bring her nine children to safety in the neighboring country, The Gambia. “We left because we feared for our lives,” she said. “The gunshots would go all night. We didn’t know if the rebels would kill us or not.”

“Thanks to the peace garden, we are starting to mend the fabric of our community.” —Awa Djiba, survivor of the Casamance civil war

When Awa returned five years later, she had to continue to live side-by-side with people who supported the rebels during the war. Thanks to the peace gardens, she and her neighbors have been able to begin to put aside their suspicions and fears. Their conversations over soil and seedlings nurture connection and understanding. And the income they make selling their crops has improved life in the village, reducing some of the tensions that sparked war in the first place.

AJWS has supported the peace movement in Casamance since 2010, and the movement has grown stronger each year. We began by supporting a fledgling coalition called Plateforme des Femmes pour la Paix en Casamance (PFPC). 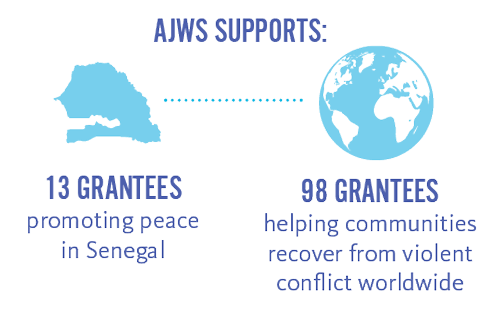 Today, the group represents 210 local civil society organizations and more than 40,000 women who have rallied, marched and advocated to ensure that the ceasefire holds and true peace will one day come to Casamance.