Transforming assailants into allies in Kenya

In 2010, as rumors of a same-sex wedding swirled in the conservative coastal city of Mombasa, Kenya, angry Muslim and Christian religious leaders mobilized locals to “flush out the gays.” The call was heeded by many local boda boda (motorbike taxi) drivers—a group with a reputation for violence that is frequently called upon by politicians and religious leaders to carry out their dirty work.

Armed with sticks, stones and other weapons, a mob of hundreds of men and women, including many boda boda drivers, descended upon an HIV/AIDS clinic in the nearby town of Mtwapa. “The mob wanted to burn us, to beat us,” recalled Ali Chege Omari, who was among the gay men and volunteers at the clinic who survived the merciless attack. “They wanted us killed.”

Since then, human rights groups have documented a wave of attacks on LGBTI Kenyans. In response, a host of LGBTI organizations, including AJWS grantee Initiative for Equality and Non Discrimination (INEND), are working to build a culture of tolerance, focusing on religious leaders, local government officials, media professionals—and the boda boda drivers.

“The hatred is going down.” —Santa Bingo, boda boda driver who has become an ally to the LGBTI community

INEND’s charismatic founder, Esther “Essy” Adhiambo, was determined to transform the drivers’ homophobia and prejudice into empathy and tolerance. “Don’t protest to ignorant people,” she said. “Bring them to the table, sit with them, educate them and inform them.”

In just two years, INEND has trained at least 320 boda boda drivers through intensive workshops and turned them into an unexpectedly dedicated legion of protectors for LGBTI Mombasans. 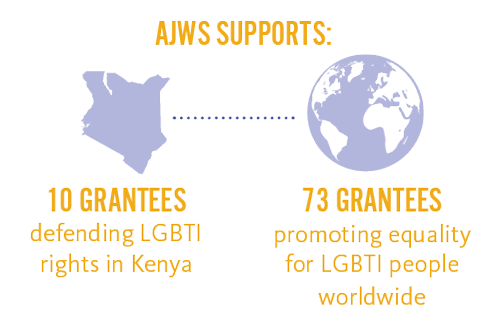 One driver, Santa Bingo, participated in the attack on the LGBTI clinic in 2010; but today, he educates his peers to protect the gay community. He is proud that “the hatred is going down.” He and many of his fellow drivers now wear special reflector vests with INEND’s logo, signaling to LGBTI people that it’s safe to ride with them. And when they see an LGBTI person being threatened, they alert INEND so its network can intervene.

For Chege, who survived the 2010 attack, the sound of a motorcycle revving no longer signals fear, but hope for the growing understanding between the LGBTI community and their new allies.