“We applaud the House of Representatives for their overwhelming show of bipartisan support to end human rights atrocities in Burma by passing the BURMA Act with a vote of 394 to 21. This bill would sanction leaders of the Burmese military; demand safe, dignified, and voluntary repatriation of Rohingya refugees; demand accountability for the many persecuted ethnic and religious minorities in the country, and promote efforts to achieve justice for war crimes, crimes against humanity and genocide.

It is now the clear responsibility of the U.S. Senate to pass similar legislation without delay.

Congress must send a unified, resounding message to the Burmese military and the global community that the United States will not stay silent in the face of genocide and other atrocities.

We applaud Representatives Eliot Engel (D-NY) and Steve Chabot (R-OH) for their bipartisan leadership of this legislation to advance justice for the Rohingya people and all ethnic minorities in Burma.

Since the Burmese military launched a genocidal campaign against the Rohingya people just over two years ago, more than 700,000 Rohingya people have been forced to flee their home country to escape horrific violence—simply because of their ethnicity and religion. This legislation would help curtail the culture of impunity in the Burmese military that has led to decades of mass atrocities and human rights violations.

As the leading global Jewish organization supporting human rights in Burma, we cannot stand idly by while the Rohingya people are targeted for genocide. We know from our own history and the history of all persecuted minorities that staying silent makes us complicit. We know the importance of standing up unequivocally in defense of minorities facing state-sanctioned oppression and violence. We will continue to join with all ethnic and religious minorities in Burma to address the culture of impunity that has fostered years of human rights violations and mass atrocities.

At American Jewish World Service, we have long called on the U.S. government to put human rights, justice and accountability at the core of foreign policy. The Rohingya genocide is the perfect example of why the U.S. must stand strongly for human rights.”

If you are a member of the press and wish to obtain information about our work or speak to a member of our global team on deadline, please contact Tanyanika Davis, Director of Media Relations, at tdavis@ajws.org or Stuart Schear, VP of Communications, at sschear@ajws.org. 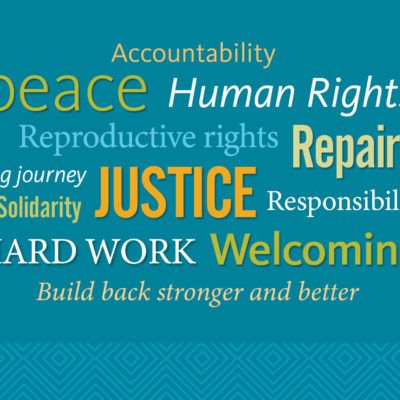 In the four painful years of the Trump presidency, the advocates AJWS supports around the world have mourned the United States’ greatly diminished role as a force of justice and progress on the global stage.…