A core component of American Jewish World Service (AJWS)’s strategy for advancing human rights is to support social movements. Learn about and download our unique tool for understanding and reflecting on a movement that is striving to make change in the world.

AJWS defines a social movement as a critical mass of people working together with a variety of strategies to advance a shared purpose for lasting change and social transformation. Historically, autonomous and progressive social movements have played a crucial role in advancing policies that affirm human rights, increasing the political power of marginalized groups and challenging harmful social norms.

A tool for reflecting on the state of social movements:

In order to support social movements effectively, it’s critical to understand these movements—including their base, structure and strategy. To do so, AJWS developed a tool for reflecting on the social movements in which our grantees engage. By comprehensively identifying and reflecting on the movements that we indirectly support, we hoped to increase our understanding of our grantees’ work and develop and strengthen our funding strategies.

We developed an initial version of the AJWS Social Movement Tool in 2016, produced by a working group of our staff who have substantial experience as social movement actors or grantmakers supporting social movements, and/or who hold expertise in research and evaluation. The group’s work was informed by a review of the existing literature on social movements and insights from a first draft of the Movement Capacity Assessment Tool developed by Global Fund for Women. Since then, AJWS’s tool has gone through an iterative development process, informed by feedback from social movement actors and experts, as well as statistical factor analysis and an extensive literature review.

The tool is an important reflection instrument for organizations that fund social movements. It also serves social movement actors, who can use the tool to reflect on the state of their movements and to better understand who is participating, how the movement is organized and led, and how it strategizes to advance its agenda. The tool is not meant to evaluate a movement, but rather provide a framework for social movement actors and supporters to take stock of the state of the movement and facilitate systematic reflection—assessing different aspects that contribute to the strength of the movement and the achievement of its goals—to inform strategy development.

We believe the discussions and insights that have emerged from engaging with the tool have meaningfully informed our strategy development as well as the movements that we have supported in using it. We invite you to test it out and share your own learnings.

How the tool can facilitate your learning:

This tool is designed to help social movement (SM) actors and supporters—such as donor organizations—assess and reflect on the state of their movement in order to better understand who is participating, how the movement is led and how it achieves its goals. These insights can then contribute to the development of strategies and future growth. We recommend using the tool in one of the following ways, depending on who is participating:

We have been piloting a participatory methodology for use of the tool and have held five convenings with grantee partners and/or funders. This methodology will be available for sharing.

Fill out this form to receive a copy of the methodology and any other new and related resources when they are released.

The AJWS Social Movement Tool is focused on assessing each movement according to the characteristics of successful social movements:

Learn more about the tool & AJWS's Support of Social Movements

With more than 30 years of experience supporting grassroots activists and social movements in the Global South to advance social justice, American Jewish World Service has learned important lessons about how to provide this support in the promotion of human rights.

If you are interested in using the AJWS Social Movement Tool or have any questions, please reach out to Irit Houvras, Vice President for Strategic Learning, Research and Evaluation at ihouvras@ajws.org.

As this work evolves, we look forward to updating you on our progress and opportunities to access additional tools and resources. 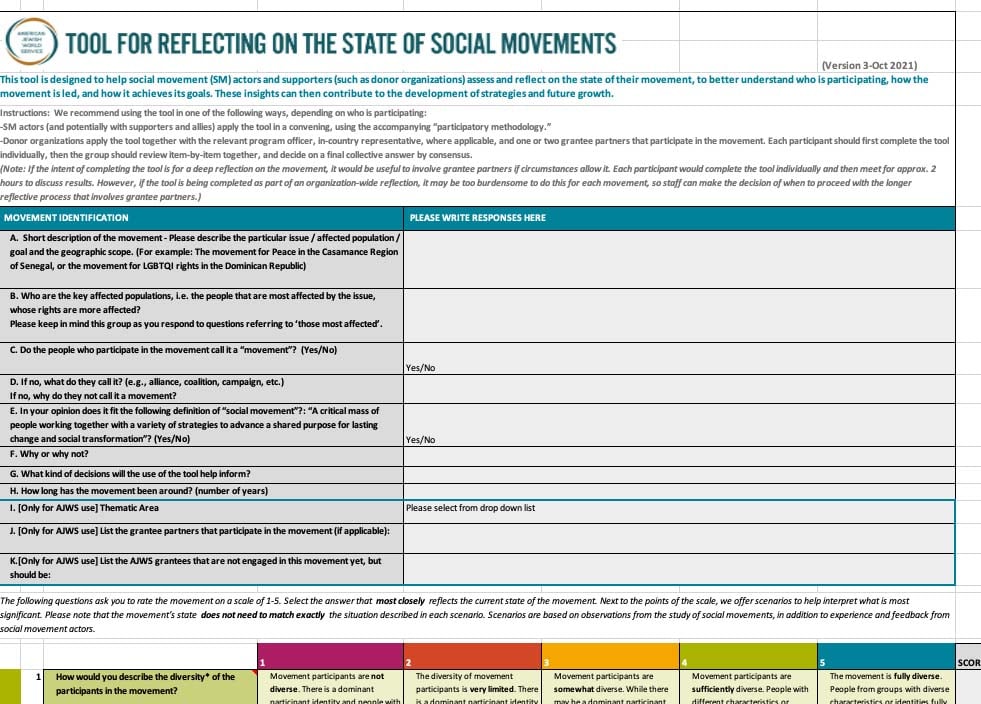 You will also receive updates from AJWS on future iterations of the tool and other resource releases.