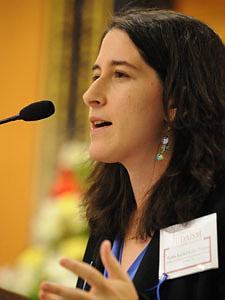 Sometimes the best of intentions can lead to tragic outcomes. In Parshat Vayigash, Joseph has his hands full managing the seven years of catastrophic famine that have followed seven years of prosperity.[1] The Egyptian people are starving while Pharaoh has food, having stored much of the harvest during years of plenty. But the people’s ability to buy grain disappears along with their savings. The famine has yet to play out its course, so Joseph begins to collect their possessions for the king: first their livestock, then their land and finally their personhood.[2] To avoid death, the Egyptian people become slaves to Pharaoh, foreshadowing the Israelite enslavement in Exodus.

Despite our own moral indignation that the price of avoiding starvation is slavery, The Torah does not condemn Joseph for his actions. The commentator Nahum Sarna suggests that the biblical text “shift[s] the onus of responsibility for the fate of the peasants from Joseph to the Egyptians themselves. The peasants initiate the idea of their own enslavement (v. 19) and even express gratitude when it is implemented!”[3]

Many traditional Jewish commentators see Joseph’s strategy as an example of his successful leadership and are silent on its moral implications, but modern commentators are deeply uncomfortable with Joseph’s approach. Some suggest that the Egyptians’ subsequent enslavement of the Israelites stems from their memory of this time: they can remember only their servitude and not their escape from starvation.[4] The ethicist Leon Kass is even more directly critical, condemning Joseph for introducing into Egypt the idea that human beings can be owned by the state:

Israel is…cursed by Joseph’s policies…Joseph’s consolidation of Pharaoh’s power will result in the practice of wholesale slavery. Thanks to Joseph’s agrarian policies, Egypt is transformed into a nation of slaves and Pharaoh becomes Egypt’s absolute master.[5]

Another problematic aspect of Joseph’s “solution” is the long-term impact, which extends a system of indebtedness and servitude to future generations.[6] For all of these reasons, Joseph’s moral choices leave a lot to be desired.

Unfortunately, intergenerational debt bondage is not just an ancient problem. This form of slavery is the most prevalent found today, with more than half of all modern slaves serving as bonded laborers. And while the problem is most rampant in India and southeast Asia, incidents of debt bondage can be found around the world.[7] Like Egypt’s seven years of famine, debt bondage often starts with a short-term financial crisis. Faced with an urgent medical issue or a lackluster harvest, a person borrows a small sum. Additional fees, interest and penalties balloon the debt beyond its original size. Unable to repay the loan, the borrower becomes enslaved to his or her creditor, who might also sell the children of the debtor against the debt.[8] One could argue the biblical rationalization that bonded individuals enslaved themselves as a solution to an emergent crisis. But no one faced with starvation or a critically ill family member could envision that the act of taking a loan would lead to generations of enslavement, violence and poverty.

Debt bondage remains largely invisible to the average consumer, but we all benefit from it. Slave-produced goods are ubiquitous in American markets. In September, the United States Department of Labor released a list of 122 goods produced in 58 countries and imported to the United States that are the work of child or forced labor.[9] These include some imports of everyday products like cotton, coffee, sugarcane and cocoa.

As consumers of these goods, we are complicit in modern slavery; however, we can also use our consumption choices to end it. For example, we can buy fair trade goods, which reward employers who pay an honest, living wage. AJWS has partnered with Equal Exchange to sell kosher-certified fair trade coffee and chocolate,[10] two industries that have long been plagued with slave labor. There are also other forms of certification that promote a slavery-free supply chain, such as the new Free 2 Work campaign, which rates corporations based on their use of slave-free labor.[11]

Corporate responsibility and government action are also critical to ending modern slavery. We can reward companies that eradicate slave labor from their products, for example, by lobbying our 401k funds to invest only in companies that have a transparent supply chain. We must also urge government officials to require trade partners to take anti-slavery actions,[12] and lobby for the reauthorization of the Trafficking Victims Protection Act, which includes provisions for the detection, liberation and treatment of both domestic and international slaves.

With all of the prosperity of today’s world, no one should be forced to make the choice that lay before the Egyptians of Joseph’s day: freedom or starvation—especially when the consequences can potentially last for generations. But we can interrupt this cycle through the choices we make as consumers and the steps we take as activists. If we simply open our eyes to the injustice in our midst, we can see the path towards ending slavery in our lifetime.

[9] The Department of Labor’s List of Goods Produced by Child or Forced Labor: Report Required by the Trafficking Victims Protection Reauthorization Acts of 2005 and 2008. &nbsp;The United States Department of Labor, Bureau of International Labor Affairs, and the Office of Child Labor, Forced Labor and Human Trafficking. http://www.dol.gov/ilab/programs/ocft/PDF/2009TVPRA.pdf