It’s not every day you get to personally thank your member of Congress for advancing the issues you care about. But over the past few months, AJWS supporters from across the country have been knocking on their representatives’ doors to deliver framed certificates to members of Congress who have stood up for international food aid reform – and, by extension, for the rights of AJWS’s partners in the developing world.

Thanks to the tireless work of these activists, food aid reform has changed from an “if”… to a “when” and “how.”

On June 19, 2013, the House of Representatives held an historic vote to reform the way the U.S. manages and delivers international food aid. As part of the ongoing (and seemingly never-ending) Farm Bill deliberations, Representatives Ed Royce (R-CA) and Eliot Engel (D-NY) introduced a bi-partisan amendment to build greater flexibility in our system, purchase food locally, when available, instead of shipping food overseas. This bill would enable 4 million more people to receive the food they need— faster, more sustainably and without spending an extra dime.

AJWS activists had been building toward a vote on this bill for many moons. Over the last two years, AJWS supporters have cultivated relationships with their members of Congress through e-actions, hand-written letters, in-district meetings, targeted op-eds and letters to the editor, and monthly national calls to stay on top of the issue and take strategic action as needed. They even traveled to DC—twice—for a day of lobbying on Capitol Hill. They have used every platform at their disposal to express their commitment to global justice and to make the case for international food aid reform.

On June 19th, we lost the vote for reform by a narrow margin. Nonetheless, AJWS activists saw much of their hard work bear fruit. As someone who has been involved in organizing for more than a decade, watching the House debate and vote on the issue was incredibly moving. Had you polled Congress six months earlier, it’s very unlikely that anyone would have predicted, 1) an actual debate on the House floor on the issue (it had never made it that far previously), 2) members of Congress (most of whom AJWS had been in contact with) making passionate arguments reflective of the position that AJWS activists have been articulating for 2 years, and 3) a vote so close, with strong support from both parties, that experts are now calling food aid reform ‘inevitable’ (we lost be a mere nine votes). In other words, AJWS activists and our allies moved the discourse from ‘if’ food aid reform should happen to ‘when and how’ it would happen—no small feat!

AJWS activists know that to keep fighting the good fight, in solidarity with our partners in the developing world, it is critical to keep flexing our civic muscles and cultivating ongoing relationships with our elected representatives. Doing so means that when the next vote comes, whether it’s on the issue of food aid reform or any of the other important human rights issues confronting our partners on a daily basis, we’ll be even better positioned to make an impact as a Jewish community working for global justice.

To get a taste of our work, check out some of the great photos above, featuring activists who are mobilizing their communities in NY and LA, Boston and San Francisco! We’re excited to continue building our power as a community that makes meaningful, lasting change—together. If you’d like to get involved in our efforts, please email us at getinvolved@ajws.org. 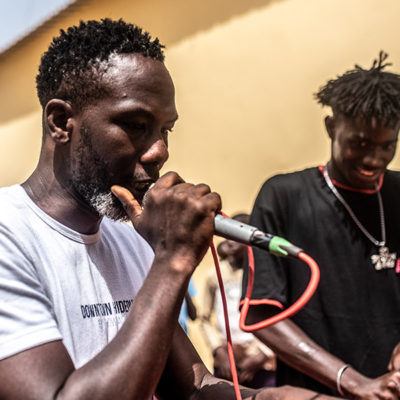 Just after sunset on a Friday night in Pikine, Senegal — one of the poorest neighborhoods in the capital, Dakar — the energy at a local community center is electric. Spotlights make the courtyard glow…