Fighting for a Just Water System in El Salvador

The future of water may be about to change in El Salvador. In June, the new conservative National Congress and environmental commission abandoned decades of collaborative efforts to create a General Water Law, which had achieved significant consensus across political parties and organizations. The General Water Law would put decision-making power related to this valuable natural resource in the hands of a new state institution that is supervised by a national council—ultimately accountable to the Salvadoran people—with input from all sectors of society and experts.

But now, the National Congress is considering a bill proposed by the private sector, which abolishes public management for water sources. This proposed legislation would privatize water and significantly obstruct poor people’s access to the country’s already scarce and threatened water resources.

Grassroots groups and the Catholic Church immediately protested, publishing a dramatic statement, titled: “We cannot let the poor die of thirst.” A few days later, university students led a protest to the Congress, calling it a “first call to attention.” Their peaceful protest was received with teargas, anti-riot police and armed private guards of the National Congress, which has not happened to demonstrators in years. Just two days later, an impressive national march of several thousand people – also unseen in recent years – amplified the students’ protest. AJWS’s partners UNES, ACUA, Foro del Agua, FESPAD, MNFM were involved in the organizing. Many local, regional and national protests, public debates and social media campaigns since then have succeeded in urging the Commission for the Environment—which governs decisionmaking around water issues —to make some concessions. 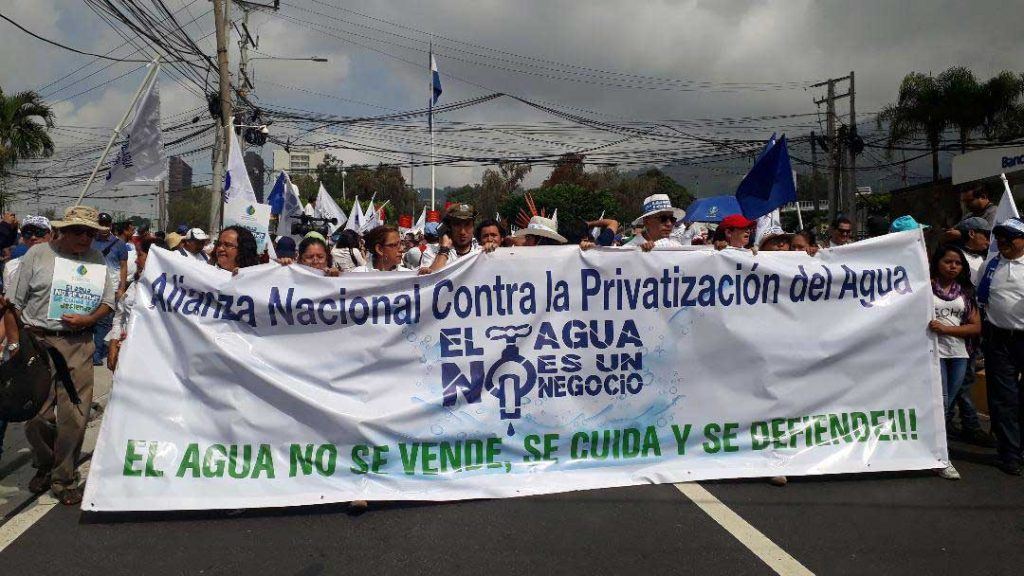 The Commission agreed to hear concerns from the Church and civil society organizations. In July, Archbishop Luis Escobar, representing the Catholic Church, academic leaders and a diverse group of social justice advocates—including AJWS’ partners—were finally allowed to bring their objections to the water privatization bill to the Commission. Their concerns have been raised, but still no agreement has been reached.

On July 19th, a coalition of social movements, labor unions and local communities organized a nationwide protest and simultaneous, non-violent actions around the country. This second major call to action announced that more massive protests will follow.

These actions have significantly raised awareness about water privatization, with more and more organizations and individuals getting involved. Even the right wing Presidential candidate is changing the way he talks about water rights, attempting to make the private sector bill sound appealing to the electorate.

What Do Salvadorans Want in a Water Bill?

The struggle against privatization and for a just water law will be on the national agenda for the months ahead. Here is what AJWS’s partners are fighting for in a General Water Law:

Finally, this water privatization debate is occurring in a month of drought and extreme temperatures during what is typically El Salvador’s rainy season. The impact of climate change, especially prolonged drought and extreme weather, could be even worse than expected. AJWS and our partners in El Salvador will continue to advocate for a water policy that is just, sustainable, and meets the changing needs of Salvadorans.

Dorothee Molders is the In-Country Consultant for El Salvador at AJWS.